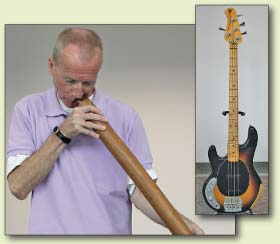 In 1988, John met some Aboriginal musicians from Australia. They were visiting Edmonton.

John became friends with the musicians. They gave John a few lessons on the didgeridoo.

John liked the didgeridoo. So he bought one.

After that, John taught himself how to play the didgeridoo. He practiced a lot.

John listened to records and tapes. He learned to breathe in a special way.

John has six didgeridoos. He made four himself.

John would like to go to Australia one day. He wants to learn more about the didgeridoo.