Harassment can be words or actions. For example: jokes, insults or touching.

Harassment upsets people. It might make them angry, afraid or embarrassed.

My boss is too friendly. He often touches me. I don’t want him to touch me. 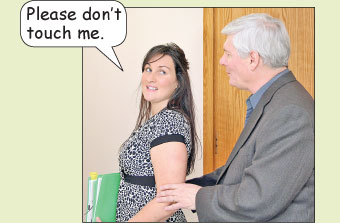 My boss also asks me to have drinks with him in a bar. I always say no. He doesn’t ask other employees to go to the bar.

My boss is sexually harassing me. I am very upset.

Many types of harassment

Anna thinks that her boss is sexually harassing her. There are many other types of harassment. For example: